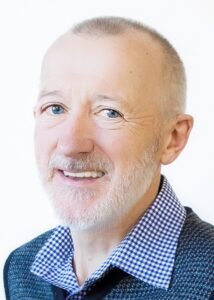 I’m a ‘Parkie’ of course but more importantly, I’m a husband, a dad of 5, a grandad of 2, and a proud Limerick man, living in Adare with my wife Catherine in our “empty nest” which is now home to 1 cat, 1 elderly rescue dog and our most recent addition – 2 French bulldog pups.

Although I’m a lifelong Limerick hurling supporter, in my younger years I wasn’t particularly sporty; 5-a-side soccer once a week and the odd hill climb was about the extent of it, along with what started as the occasional game of golf (and what has over the years become a weekly occurrence).

In my early 50s I was getting bored with the gym and decided to swap the treadmill for the great outdoors. I ran my first 10k just over 10 years ago and followed that with a half marathon later that year. It was only a month later that a physiotherapist picked up on a tremor in my right leg, and over the next year I noticed the tremor become more pronounced until I was finally diagnosed with PD in December 2012.

I’ve stuck with the running, racking up various half marathons over the years, and in October 2016 completed the Dublin marathon with two of my sons. In the past couple of years, I’ve also turned my attention to cycling, and spent many a Sunday morning spinning around the hills of West Limerick with the local cycle club. In 2018 I even tackled the 725km spin from Mizen head to Malin head – and raised a few euros for the PAI along the way.

I like to think of myself as a glass half full type of person. I always say “don’t sweat the small stuff – and it’s all small stuff.” PD has given me a different, better perspective on life. Of course it’s been challenging, for me personally I’ve always been into DIY but as you can imagine, my fine motor skills aren’t what they used to be. I’ve always been driven and determined, and nowadays that determination is focused on beating this disease, or at the very least, not letting this disease beat me.

I’ve been working fulltime for over 40 years, and with my DBS surgery last year being a great success, I feel like I could go 40 more! I’m delighted to have the opportunity to get out on the course at the Belfry this October with my fellow PD warriors – may the best team win!