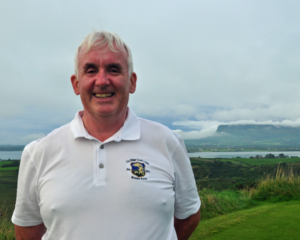 I am happily retired from a lifetime in banking and live in Sligo town in the heart of Yeats Country in the north west of Ireland. Throughout my life I have always been active in sport and have tried my hand at everything from snooker to triathlons. My two sporting passions however are golf and football. I still “play” in a weekly kick-about game every Thursday night but most of my football activities are now confined to following the fortunes of Sligo Rovers, Leeds United and Ireland. I am a season ticket holder at the Showgrounds, try to get to Elland Road a couple of times each year and to as many Ireland games as possible. I have managed teams in the local underage and amateur leagues and although no longer involved I am a regular at Cartron United (my son’s team) games.

I play golf at least twice a week in County Sligo Golf Club at Rosses Point, which is a Harry Colt designed championship links. The links is host to the annual West of Ireland Amateur Championship which includes amongst its past winners the likes of Padraig Harrington, Rory McIlroy and Shane Lowry. In the past I have been Club Treasurer, Club Secretary and Competitions Secretary, and am still involved in some of the club’s sub committees.

I was diagnosed with PD in 2020. Diagnosis for me was initially like waking up and finding yourself confined to a life sentence in a dark dungeon. I soon realised however that the symptoms had been present in one form or another for many years prior to diagnosis and that there was no need to allow the diagnosis impact on my lifestyle. Naturally as a golfer one of the first things that I had noticed was the decline in my golf game. Having played all my adult life of a handicap that ranged between 6 and 8 I was really concerned when the deterioration in my game was happening faster than the rise in handicap. Following diagnosis and medication things have stabilised and I now have a WHS index of 15.7 which allows me to be at least occasionally competitive.