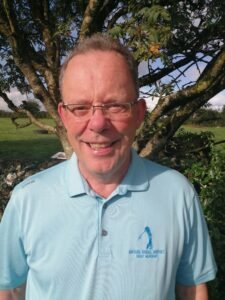 My name is Gerard Loughnane and I was born in Ballinasloe, Co Galway on 4th October 1957.

In my time I was a student of GMIT (RTC) and I qualified  as a tax consultant in 1983 and as an ACCA accountant in1987. I set up my own accountancy practice in Claregalway in 1992.

I am married to Mary  since 1986 and have two daughters Hannah and Monica.

I was  diagnosed with Parkinson’s disease in April 2010 and at that time I was actively involved with the drama festival committee in Claregalway and I was also actively involved with the ACCA, having served as national president.   Shortly after the diagnosis my GP said the best advice that he could give me was “Exercise, Exercise and Exercise”.   This gave me a greater excuse for playing golf more frequently.

In 2016 I retired from my accountancy practice as I found the work had become incompatible with the progression of the disease.

In January 2019 I underwent Deep Brain Stimulation (DBS) surgery in London as it could not be done in Ireland.  The benefits of surgery have been remarkable and the improvements of my walk and posture have been commented upon by many, including my golfing partners.

At the risk of boasting I have to say that since my diagnosis for Parkinson’s Disease I have achieved two “hole in ones”. One in Ballinasloe and one in Cregmore Park Golf Club (my home club).  I have also lost 4 shots off my handicap, although I have also recovered 1 or 2 of them.  My current WHS index is 24.3 and I intend on reducing same.

I also enjoy and missed greatly, during the current pandemic, the social aspect of golf ,  both on and off the course.